March 22, 2014 · by hypotheticallymovie · in Production Notes · Leave a comment

Geoffrey Pomeroy and Joe Forbrich on the set of Hypothetically

I had the privilege of meeting Geoffrey Pomeroy in a “10-minute” play showcase with the Abingdon Theatre Company. At the time, I was in the midst of casting the webseries Death’s Door. Watching him perform, I realized that Geoffrey was a very good actor, and he had an interesting quality to him that I found endearing. I spoke to him after the show, invited him to audition, and he was cast as “Steve” in our web series. The Death’s Door shoot was a fun, family environment and we all became very close.

Once Death’s Door was online, Geoffrey told me he had written a short screenplay that he wanted to share with me. The 10-page short was a spoof about a mob boss planning a hit on a potential target. The script had dense, fast dialogue, and even a few rhymes. I smiled to myself, even laughed out loud, while reading the script, and we started on a journey to make the short film together.

Patrick Reis and Peter Zinn preparing a shot for “Hypothetically”

The script is a two-hander, necessitating a quick witted delivery. I immediately thought of casting Joe Forbrich – a very talented actor I had worked with a few years before. Joe has a natural warmth coupled with a wicked sense of humor. Joe introduced us to Peter Zinn, a seasoned theater director and playwright. Peter loved the banter in the dialogue, but was adamant that the guys play the dialogue straight, and not reach for the jokes. He also added some danger to the backstory for the actors, using the 1985 Scorsese film After Hours as a guide for the look and feel of the film. Since “Hypothetically” was Peter’s first video directing experience, I hired Patrick Reis, a very experienced cinematographer, to support Peter’s vision.

Once Peter was on board, things moved very quickly. He cast Mickey Sumner, a very talented actress with whom he had worked before. She shared the project with Vincent Pastore, whose experience on the The Sopranos not only grounded the short in the mob genre, but aided in the authenticity of other actors’ performances.

Geoffrey and I tried to raise $5000 to make the film through Indiegogo with a fiscal sponsorship from Fractured Atlas so that donations were tax deductible. Though we fell short of our goal, we raised over $2000, including donations made offline. The balance was made up by using personal funds and cutting the budget. 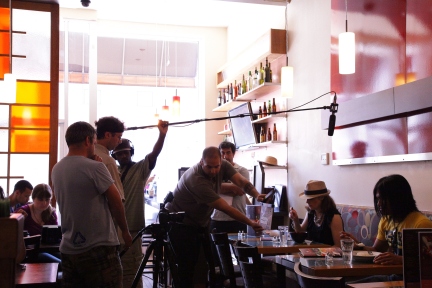 On the set of “Hypothetically”

We shot the film in one day using two Canon 5D Mark III cameras. Most of the crew members had worked together before, making things run smoothly during filming. We got a great editor in Anne Barliant, an amazing composer in Robbie LaFalce, Jr., and an amazing colorist in Kirk Douglas (no relation). Kirk was a great help overall in post, guiding me through the finishing process.

I submitted the film to the Cannes Short Film Corner and was fortunate enough to be selected. The standing room only screening at Cannes was filled with laughter. Since then, we have submitted the film to various festivals through Withoutabox. The film will premiere at the Cleveland International Film Festival March 21st and also has been selected to screen at the Sarasota Film Festival on April 5th.

a film blog by Daniel Quitério